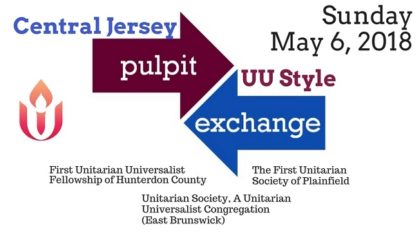 Pulpit exchange has deep roots in our historical polity as Unitarian Universalists, proscribed in the Cambridge Platform of 1648, the document upon which we base our kind of congregational polity (governance) and ground our understanding of a covenantal, rather than creedal, religion. Yet while the historical connection is there in our polity, and even though there was a robust practice of exchanging pulpits in 19th century New England Unitarian churches, as a current practice we are much less familiar with it.

We are about to change that! At least for three of our congregations here in Central Jersey. On Sunday, May 6, the ministers from Plainfield, East Brunswick, and Hunterdon County will play a kind of musical chairs.  While you stay in place, we will move to a different congregation to preach.  We aren’t taking the day off – we are just preaching at a UU congregation in our wider neighborhood association. Pulpit exchange is one way for us to honor the autonomy of each congregation, while also recognizing that we are in association with one
another as well.  Did you know that the full name of the UUA is actually the Unitarian Universalist Association of Congregations?

Pulpit exchange has many benefits:

Other benefits include, when a minister departs (moving onto another congregation; retiring altogether), the congregation will have already experienced little leavings.  When a minister is on temporary leave, there
already is familiarity with a local minister who may be providing emergency pastoral care.  There is the
beginning path for sharing resources among congregations beyond the pulpit.

It’s fair to acknowledge that there are possible drawbacks.

While the congregation will experience that their settled minister is away, it can feel to them like it is the
minister’s day off; however, in fact, the minister is still working, just elsewhere.

It can be vulnerable to expose oneself to comparison — what if one congregation likes the guest minister’s preaching better?  What if one minister likes better some aspect of the other congregation?

I am looking forward to strengthening the connections between these small mid-size congregations in Central Jersey.  I hope you are, too.

I am blessed to be on this journey with you, 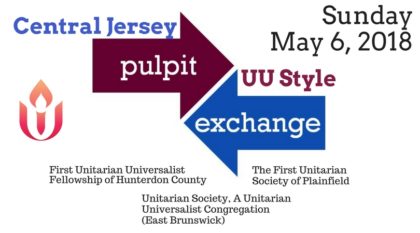 Donate to The Unitarian Society

You can now donate to TUS via PayPal!

Check out our Sermon Archive here. Video is available for many services.